How your emotions affect the muscles in your throat

You are here: Home / Blog / Guest Blogs / How your emotions affect the muscles in your throat

Guest Blog on the drawing of the Thyrohyoid Muscle by Elissa Weinzimmer, Vocal Health Educator. 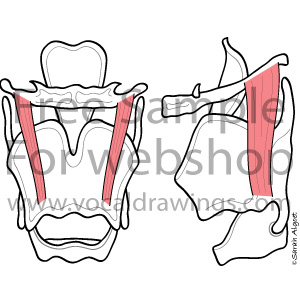 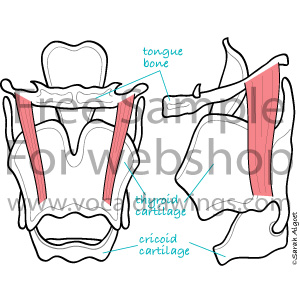 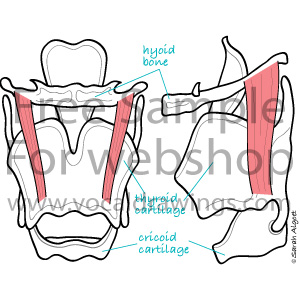 Pretend for a moment that you’ve just gotten scared. Something that you fear has stopped you in your tracks, and now your body has frozen. What’s happening in your throat? Chances are good that your muscles have tightened and you’re holding your breath.

The “freeze” response of our nervous system is actually not a bad thing… in fact it’s very adaptive. If an animal in the wild encounters a threat that they can’t fight or flee from, their nervous system will drop to a deeper, older pattern: freeze. Basically, they’ll play dead.
As human beings living in the modern age on planet earth, we constantly encounter intense stimuli that our nervous system interprets as threats. So we’re often sent into this deep pattern of freeze. The issue is that because we’re not animals chillin’ in the wild, we don’t allow ourselves the time and space to wind back up out of this pattern. So we get stuck. The freeze becomes entrenched.

Now imagine that you have this entrenched pattern, and picture this new scenario:

You’re standing backstage waiting to go on and perform. You’re nervous. Like, really nervous. What’s happening in your neck and throat? Ah, you’re in freeze again!
The rest of the scenario likely plays out something like this: You continue to hold your breath as you walk onstage. Right before your cue you take a big breath and you open your mouth to sing (or speak).

If you take a look at the thyrohyoid muscle image upon which this blog is based, you’ll see that the thyrohyoid is a small muscle that runs from the hyoid bone (right above the larynx) to the wall of the larynx (the thyroid cartilage). It’s a small delicate muscle. And in the scenario I’ve just outlined, it is pulled as tight as it can get and it stays that way from the wings to the first moment of letting out sound.

Muscles do two things: they contract and they release. And they need to do both in order to be healthy and functional. So if your thyrohyoid muscle is contracted and isn’t releasing, then it’s going to be constantly pulling your hyoid bone and larynx closer together in your throat, and pulling up on your whole larynx (which is more moveable that the root of the tongue above from which the hyoid bone is suspended.)

The result will be fatigue, a feeling of tightness and rigidity in your throat, and a less resonant voice as you perform (because there’s less space in there for your voice to bounce around). You’re going to wind up fighting against your voice, struggling to get sound out.
I know this feeling well. For years, I struggled with muscle tension dysphonia. That’s the fancy way of saying that the thyrohyoid and other related muscles in my throat were locked in freeze and wouldn’t release. It left me scared to go onstage and feeling like I didn’t have a voice. Which, after spending the first 21 years of my life completely identified by my performing abilities, was totally heart-breaking.

If you relate to this experience, then know that there are ways to retrain your thyrohyoid and other muscles to relax and release. It takes some unwinding, but it is possible. The first step is awareness – so good work meeting your thyrohyoid muscle! And keep coming back here or come visit me over at Voice Body Connection for more support!

If you relate to this story and want support to release your thyrohyoid muscles – and really, your overall muscular patterns of freeze and contraction – then I invite you to join Elissa’s free masterclass: What To Do When You Feel Like You Don’t Have A Voice on January 22nd. She’ll share techniques and exercises for how to release these small muscles when they’ve gotten stuck, and she’ll also talk about how emotional trauma can affect your voice. If you’d subscribe, you’ll see me (Sarah) there! :-)

There’s also a subsequent Release Your Voice course, a super in-depth 20 week course on releasing muscle tension and vocal fatigue, and it starts Wednesday January 29th. Applications are already open and the early bird discount is active, so go ahead and apply if you know you want in. ✨